In the weeks leading up to the special event station, we had spent time on board Ross Revenge working out what aerials we would install, where they would be located and whether or not we would be able to utilise the 45m tower.  As has already been well documented, we decided on a mixture of quarter wave verticals and dipoles.

Tony already had a vertical for 40m and we approached Innovantennas who were happy to build and donate verticals for 15m and 20m.  We used an old 5/8 for 10m (the same aerial we've taken to Herm twice) and built our own dipoles for 40m and 80m.

Come the morning of Friday 5th August, we all met in the car park on West Mersea to load the remainder of our equipment onto Razorbill 3, ably captained by Stuart to take us out to Ross Revenge. 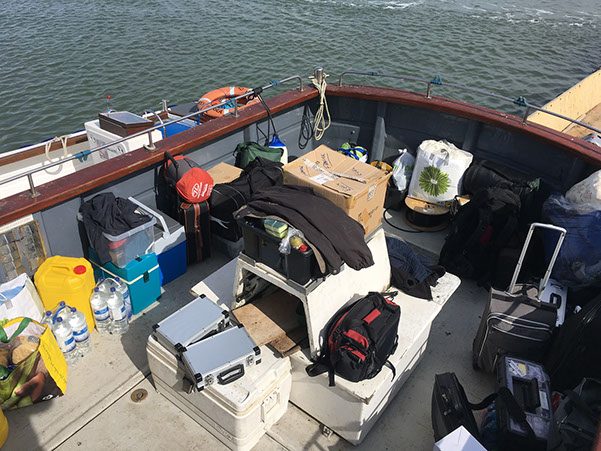 Equipment for GB5RC in Razorbill 3

Twenty five minutes later we were circling Ross Revenge for our customary quick look around to make sure everything was OK.  We were welcomed on board and everything was quickly unloaded.  Cabins were claimed and the kit we'd placed in storage was recovered.  The radio equipment was all moved to the mess and all the important food and drinks were moved to the galley. 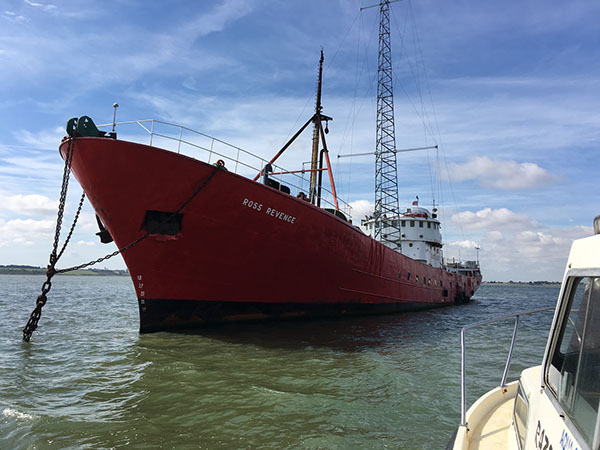 View of Ross Revenge as we approached

Work commenced very quickly to get the coax all unwound and in position and the dipoles mounted and tuned.  We'd only roughly measured them beforehand and so knew some work would be required to tune them.  With 400w output, we wanted all the aerials to be properly matched and we didn't want to use ATUs.

While we were doing this, our chef started making dinner.  We were having ribs, chicken, home made coleslaw and potato wedges. 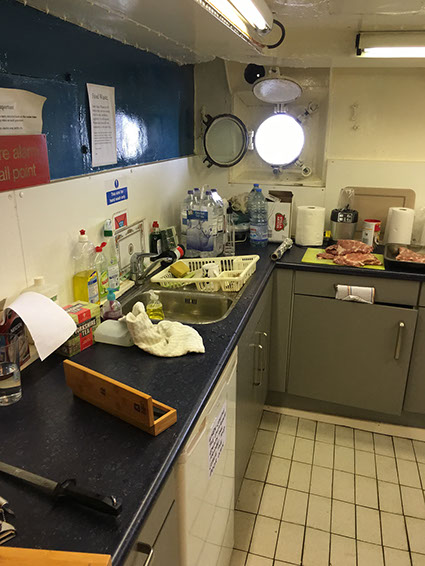 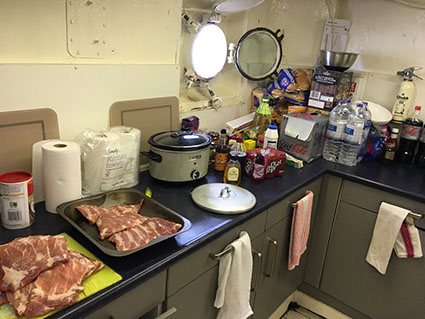 Tuning the dipoles took longer than expected, we moved the centre of the 40m dipole from where we'd originally mounted it because one end of the aerial was too close to the funnel.  Each dipole was lowered, adjusted and raised around ten times before we were happy with the tuning. 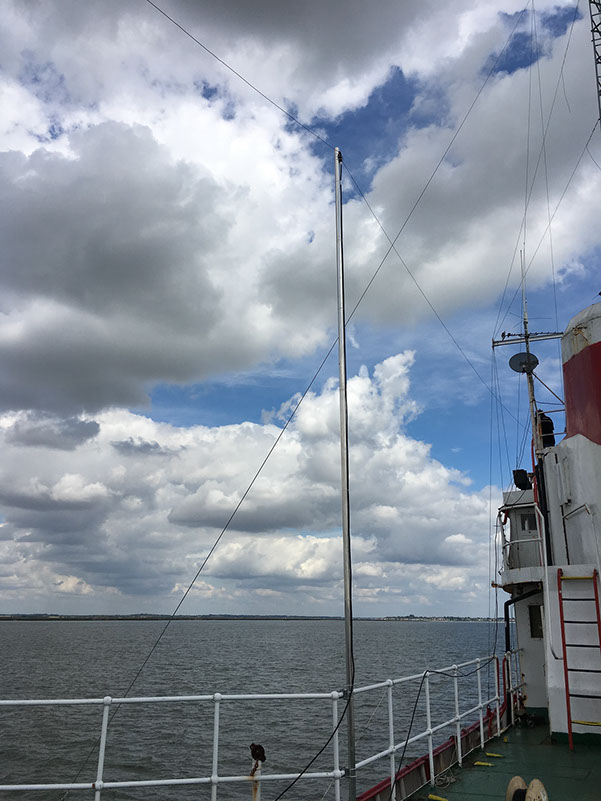 40m dipole centre on the port side of Ross Revenge

At shortly after 16:00z, GB5RC started transmitting from Ross Revenge.  Bill was operating on 20m and Mark on 40m and it was a great feeling for all of us to know that for the first time in many years, a lot of RF was being transmitted from the ship.  It wasn't quite Radio Caroline of old but this was a big event in the history of Ross Revenge. 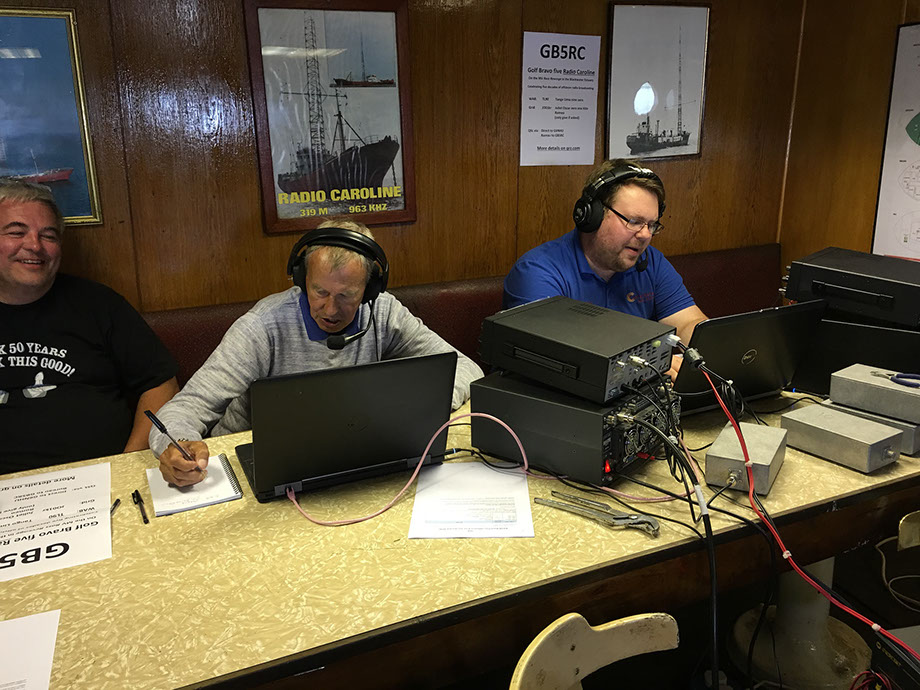 Once the stations were active, Keith took the opportunity to take a well earned break and sit on the bow with a bottle of beer.  This spot proved to be very popular for the team over the weekend as it was somewhere comfortable to sit and relax, away from the rest of the ship and catch the sun. 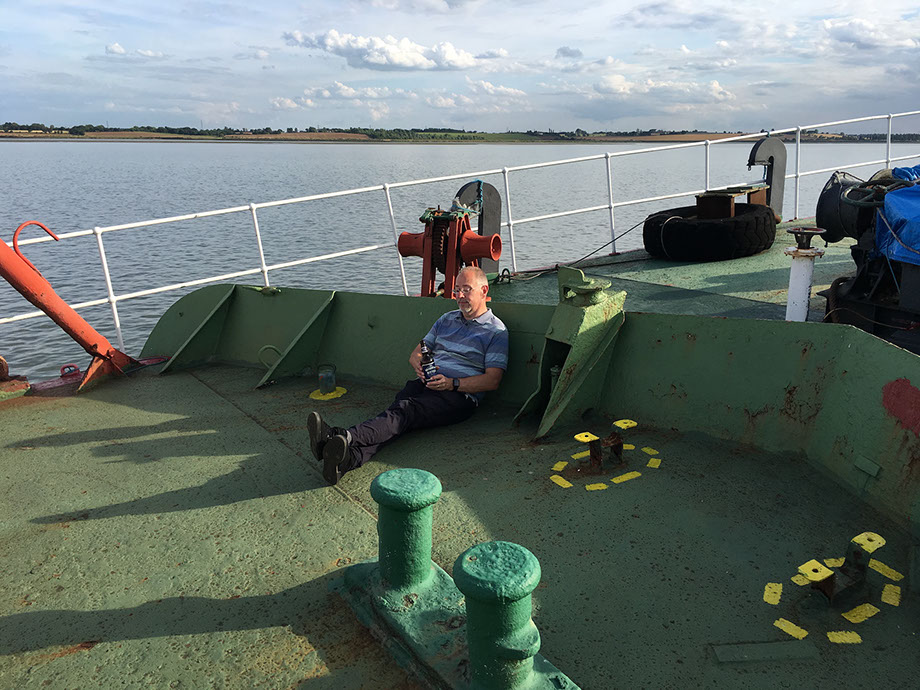 Keith relaxing on the bow of Ross Revenge

Following a break for dinner and a quick look at the sunset, operations continued until shortly after 23:30z when we all collapsed into our respective bunks, tired but happy.  We had over 700 QSOs in the log at the end of the first day. 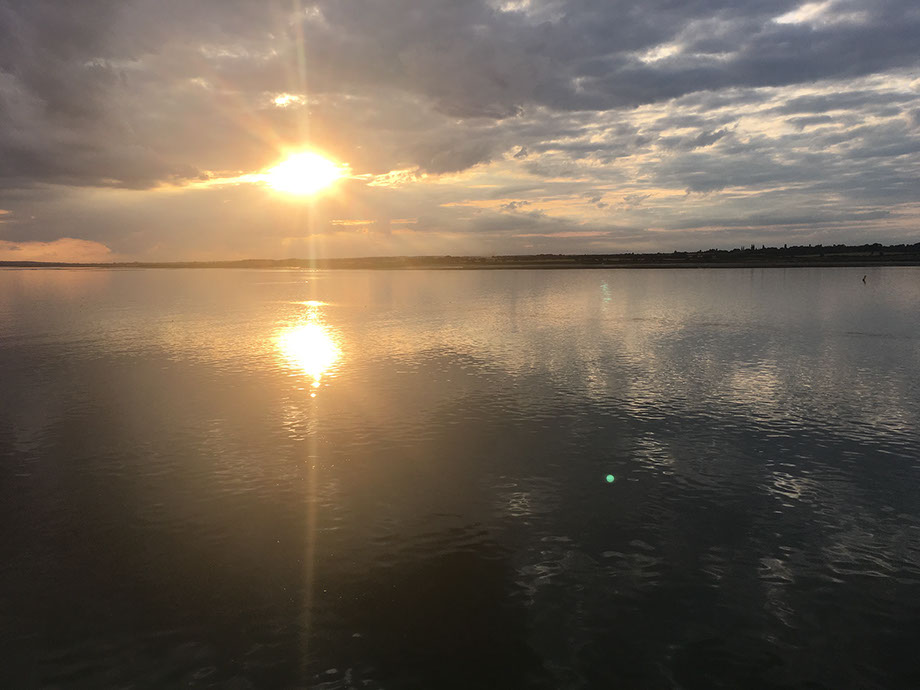 Sunset over the River Blackwater

First out of their cabins on Saturday morning were Richard and Keith.  Nobody slept particularly well that first night and so things started off quite quickly  Richard had a tune around the bands but we couldn't persuade him to actually call anyone and Keith was happy to model his ForcesRun t-shirt. 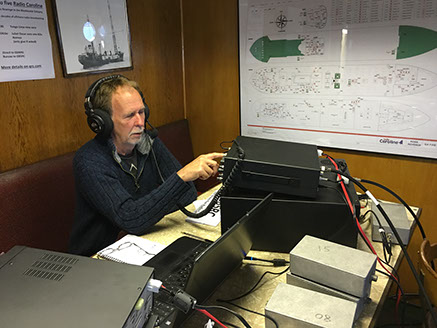 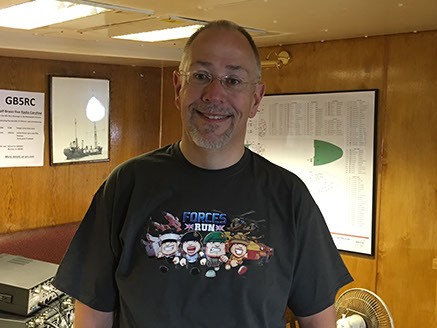 Richard tuning around on 40m

Keith in the mess in his ForcesRun t-shirt

Operating continued and on Saturday afternoon we had some visitors.  Bob and Nick came out from TX Factor and Pete from EssexHam came to see us and record some items which will be published in due course.  Martello Tower Group member, Terry was able to get onboard the tender as well so he spent a few minutes operating GB5RC and managed to make a couple of QSOs 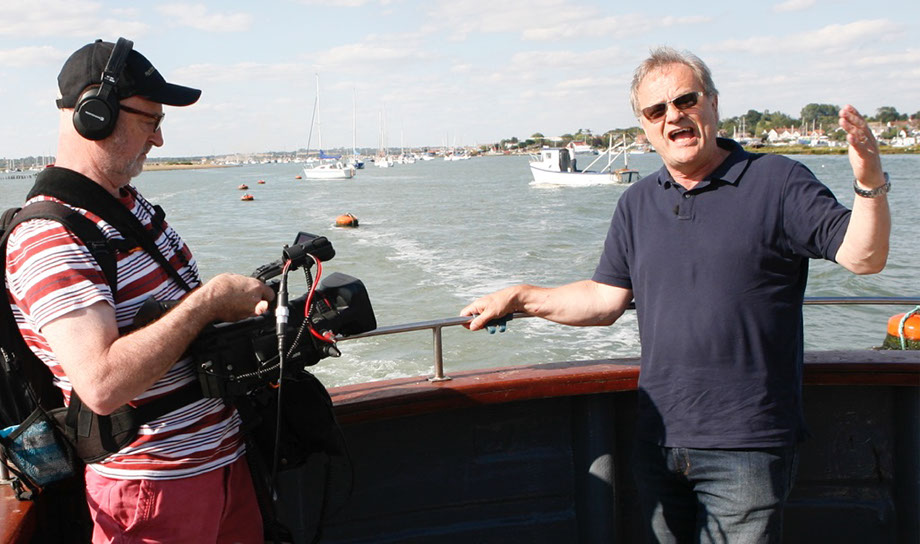 Nick and Bob from TX Factor on the tender 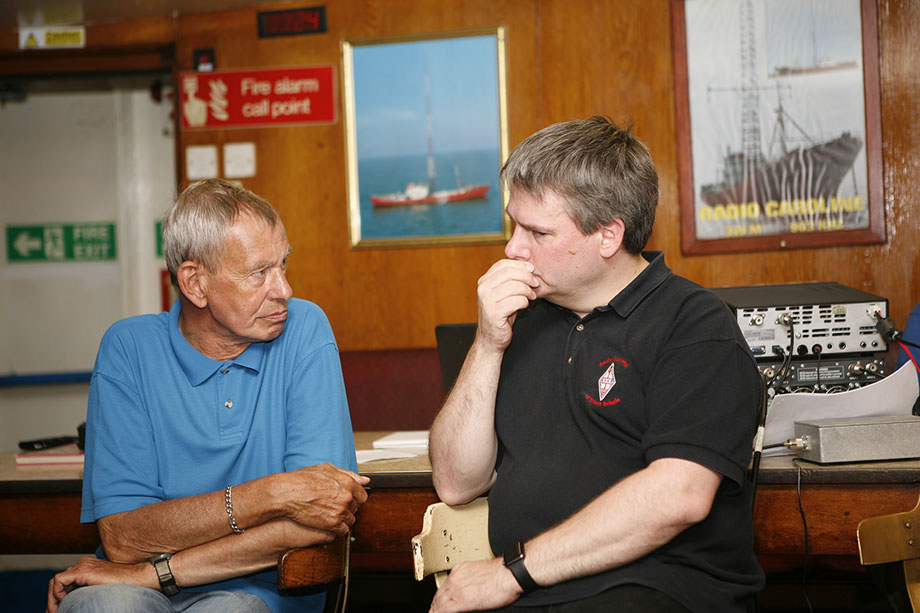 Bill and Pete in deep conversation 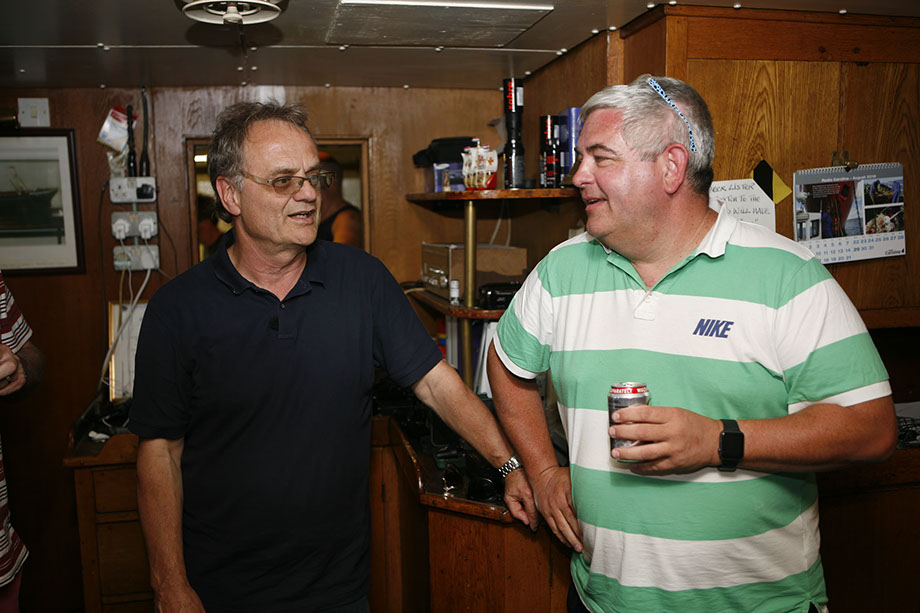 Bob and Tony in the mess of Ross Revenge 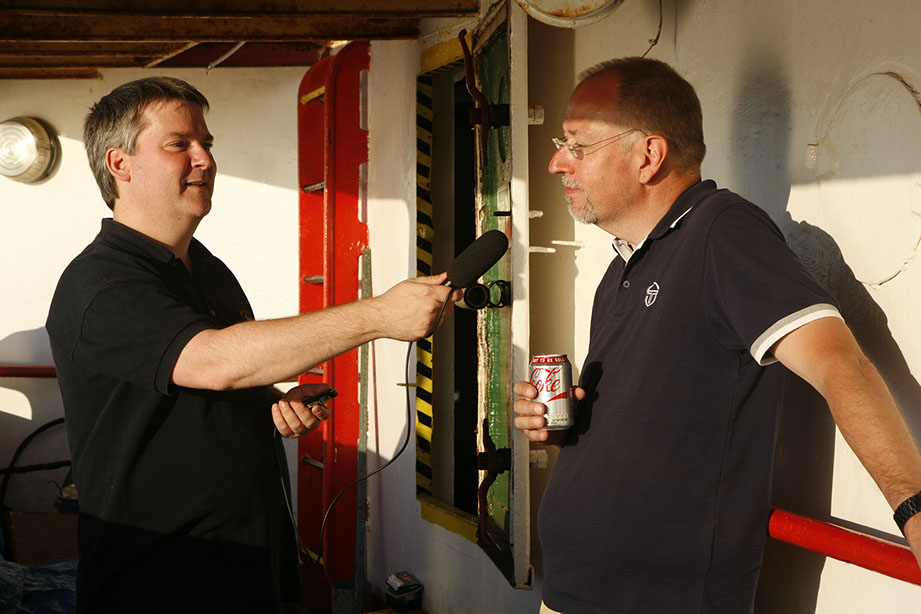 While all this was going on, some of the guys had set up a VHF/UHF station in one of the studios and were working D-STAR, DMR and 2m simplex to make contact with some local and not so local stations.  Mark also made three satellite QSOs from the front, pointy end of Ross Revenge using an FT-817 and an Arrow antenna. 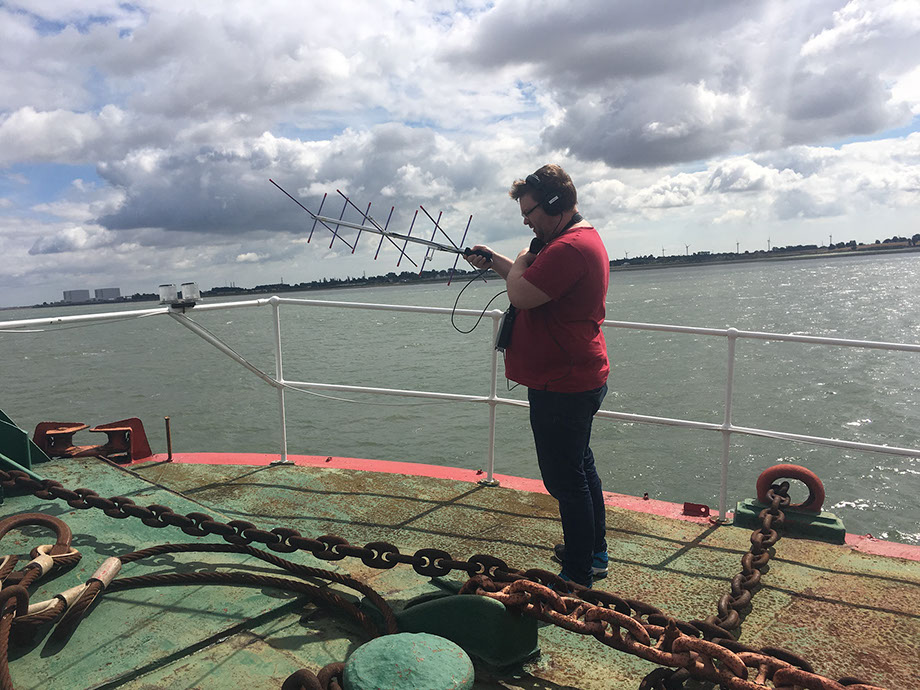 We continued operating through until around 23:40z on Saturday evening when the bands suddenly went quiet which seemed like a sensible time to close down for the evening.  Breakfast on Sunday was a leisurely affair and the stations came back on air fully at 09:30z.

On Sunday evening, our last night, Keith captured the sunset in time-lapse over the starboard side of the ship.  It's only 35 seconds long and well worth a watch.  You can see it here or in glorious HD on YouTube.

We finally closed down the stations at around 01:00z on Monday 8th August and went to bed.  We all slept in a little on Monday morning and once we were up, we dismantled the stations, removed all the aerials and spent a while tidying the ship before leaving at lunch time.

Our final QSO tallies are as follows:

We worked more than 80 DXCC entities over all continents.

There have been amateur radio stations on board Ross Revenge before but nothing on this scale or anywhere near it, this truly was an historic event.

It was absolutely amazing to hear so many nice stories about offshore radio and Radio Caroline in particular from many of the people we worked.  Pileups were huge and sometimes we rattled through the QSOs trying to get as many in the log as possible so as not to disappoint our callers but if someone wanted to chat for a couple of minutes, we were always happy to do so.  We heard many tales of how people used to listen to Caroline back in the 60s and 70s and we also spoke to a lot of people who had worked on Ross Revenge, both in her offshore radio days and also in her days as a trawler the Freyr.

Without people wanting to work us, this would have been a poor special event.  With the pileups we generated, it was a massive success!  Thank you to everyone who called us over the weekend and apologies to those who didn't manage to break the pileups.

Our two stations were pretty much identical.

Bandpass filters on each station for the appropriate band, fitted between the wireless and the amplifier.

GM3SEK chokes at the base of each vertical.  We didn't choke the dipoles.

Despite the close proximity of the two stations, we suffered very little with any interference between the two.  We had one instance where even running just 100w on 40m forced the other station into transmit (!) but this was quickly traced to RF getting in the USB cable between the radio and the logging computer.  A couple of decent ferrite beads wrapped around the USB cable resolved this.

Amateur Radio Newsline 'broadcast' three pieces about GB5RC, I've streamed them all together and you can hear them here.

The Martello Tower Group realise how privileged we are to have been allowed to run GB5RC from Ross Revenge and effectively given free run of the ship for the weekend.  We'd like to thank Peter Moore and everyone involved with Radio Caroline for their help and support.

For more information about Radio Caroline, including how to join the Support Group and help keep the station on the air and Ross Revenge afloat, please see the website.  Radio Caroline's main running costs are covered from Support Group subscriptions and donations.