We all made it home late yesterday evening after almost exactly twelve hours travelling from Herm back to Essex and we ended up with just under 4,500 QSOs in the log this year.  We had a great week and I’d like to thank everyone who called and worked us while we were away.

Our full log has been uploaded to ClubLog and you can check the log to see if you appear using the gadget on this page.  LoTW will follow in the next few days.  If you’re not in the log and you think you should be, please email G6NHU.

Thanks again to everyone who worked us, there would be no point in putting on a DXpedition if nobody wanted to work us and the pileups showed that we chose a popular destination.  I’d also like to thank our sponsors, Kenwood UK and M0CVO Antennas for the loan of their equipment.   A special thanks goes to the individuals who helped us by loaning equipment, specifically Rob M0VFC for the Elecraft KPA500 and Rich and Dick, M5RIC and GU4CHY for the Expert 1K-FA amplifiers.  Finally I’d like to thank Louis, 2U0FER who helped us out at the last minute with a box of parts which he sent over on the first ferry from Guernsey to Herm on Saturday morning, without which, the start of operation would have been seriously delayed.

I’m writing this in the early hours of the morning of the 4th October.  I’ll be leaving home in the next few minutes to pick up Yan, M0YNK and Chris, 2E0DBY.  Richard, G7HJK is collecting Tony, G0MBA, Kevin, M0GWE and Colin, M1EAK and we’ll be convoying down to Weymouth.  We are taking the 11:30 boat to Guernsey and from there we’re heading over to Herm later this afternoon.

We’re not exactly sure when we’ll get on air, we’ll either pull a late one tonight and get all the aerials up ready for an early start on the air tomorrow morning or we may just put up one aerial this evening and get ourselves on the wireless tonight.  If we do that, it’s likely to be 40m.

Keep an eye on the DX Cluster for spots of GP0PKT or for more live updates, follow @g0pkt on Twitter or search for the #herm2013 hashtag.  You can also follow some of the individual members of the group @g6nhu @YanmanHF @Tony_G0MBA @m1eak and @M0GWE.

We look forward to working you from Herm and good luck in the pileup!

Equipment collected from Newark and a new sponsor

Today we collected the Kenwood TS-590 from Kenwood UK and an Elecraft KPA500 amplifier from Rob, M0VFC at the Newark Hamfest.  It was a great day out and the members of the group who attended (G6NHU, G0MBA, M1EAK and M0YNK) had an enjoyable time.

I’m also pleased to be able to announce that we now have another sponsor on board.  Nigel from M0CVO Antennas is kindly making and supplying us a 30m dipole to use with our WSPR/QRSS transmitter that I built last night.   Thanks Nigel! 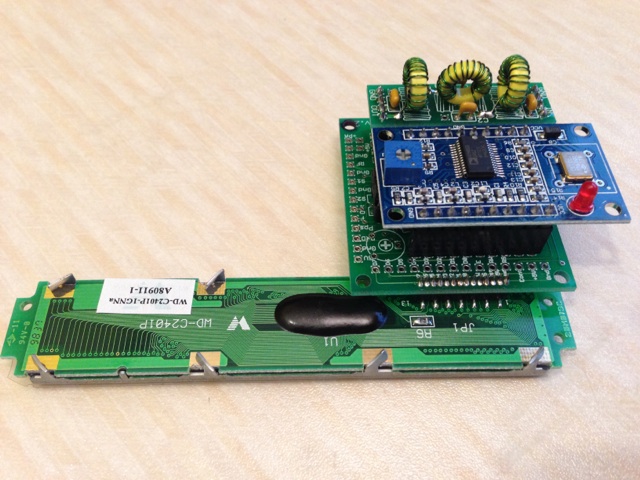 While we’re on Herm, we will be operating WSPR on 30m using low power and a dipole.

Keep an eye out for us, it’ll be interesting to see how well it works from our hilltop location.

Final planning complete. Less than a month to go.

Earlier this week we had our last planning meeting for our DXpedition to Herm and we’re now on the final countdown.  Everything is looking good, pretty much everything we needed to build has been built and there are just a few things left to complete.

Updates from the island will be sent via our individual twitter accounts and also from the main Martello Tower Group account.  Keep your eyes open for the #herm2013 hashtag.

We look forward to working you from Herm from the 4th to the 9th October 2013.

For the last few months, the team at the Martello Tower Group have been hard at work preparing for our DXpedition to Herm in October 2013 and the time has just slipped away.

We’ve had two large tasks for this year – One of them was to prepare a set of bandpass filters and I’ve documented that on my own personal blog which you can read by clicking here.  The other main task was to build our own aerials ready for the trip as opposed to borrowing them again as we did in 2012.

M0YNK decided on an unusual former for our common-mode chokes, or ‘ugly baluns’.  Sweet jars.  Of course, that meant that as we need four chokes, he had to eat his way through four jars.  I think 2E0DBY helped!  The style of these chokes means we can carry the radials inside the jar and they just need to be removed, unwound and clipped on to the radial ring.  Easy. 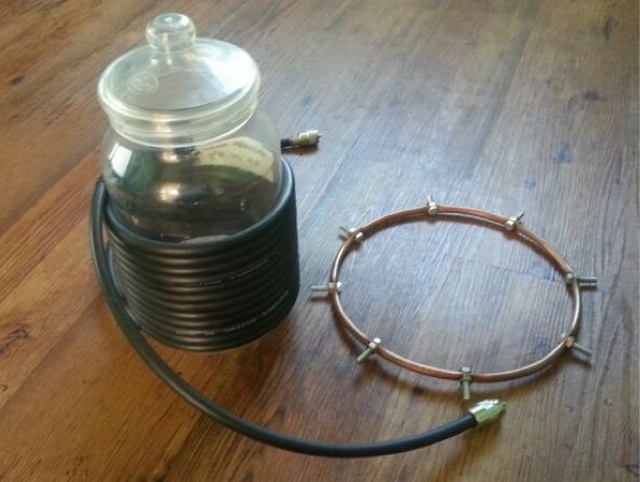 The first aerial we tested on the beach near the Martello Tower was the 40m vertical, using a 12m Spiderpole. 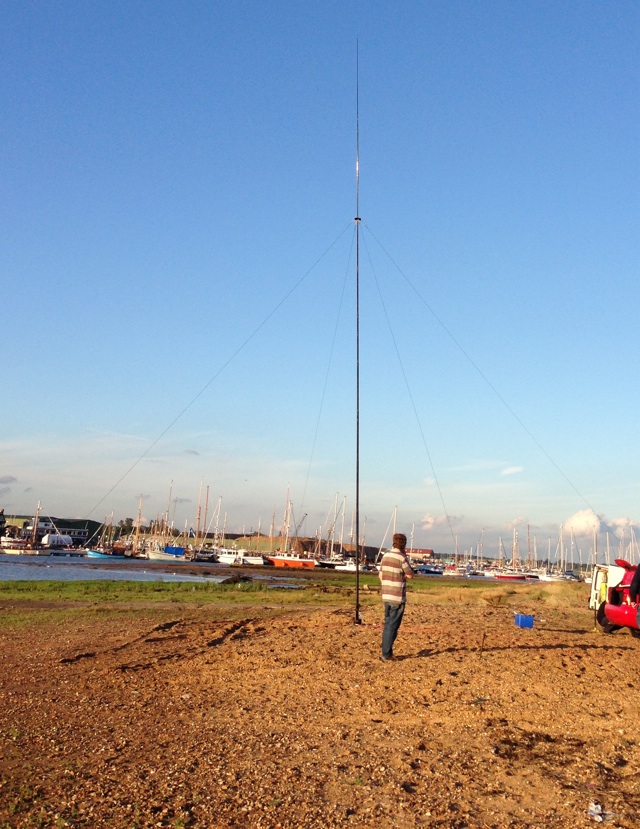 40m vertical on the beach near the Martello Tower

Next we set up one of the aerials to be used for 20m and 15m.  The construction of these two aerials are exactly the same, being made from old CB aerials with the loading coils removed.  They can be used for any of the four bands from 20m through to 12m simply by loosening a jubilee clip and adjusting the length. 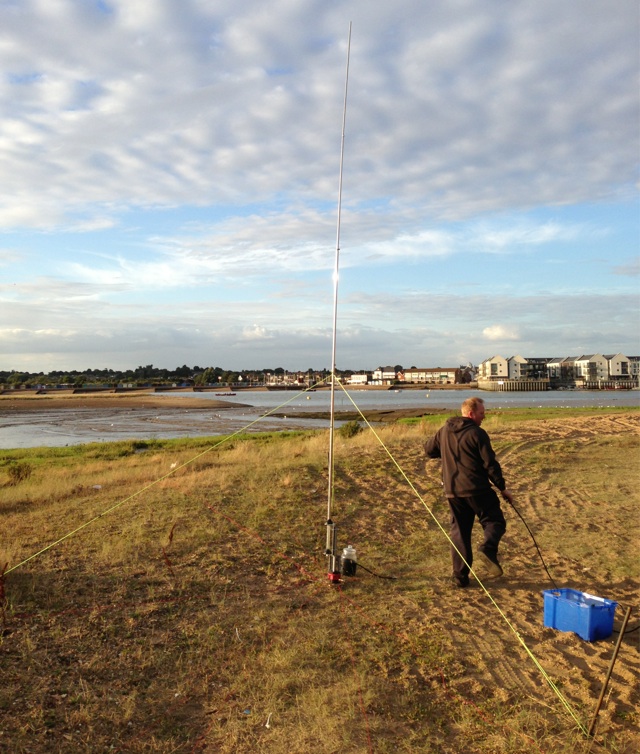 M0YNK setting up the 20m vertical

Finally we wanted to get the 80m vertical tested.  Last year we knew that it had taken around two hours to put the 18m Spiderpole and 80m vertical up and so we needed to practise.

Our first attempt could have been disastrous as we tried it without any guys attached (they’d been left behind) and as there was a steady breeze that evening, this is what happened. 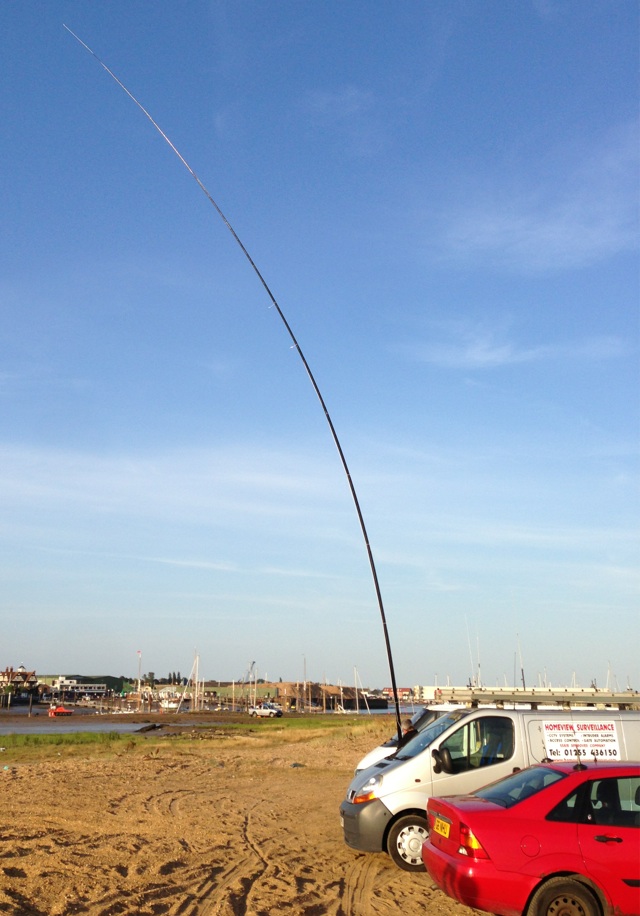 The 18m Spiderpole with the 80m vertical and no guy lines

It did prove the concept that we’d hoped to use – We could mount the pole in place and then lift it up section by section with people holding the guy ropes.  Today we put the aerial up properly and everything went well with our total time spent being about an hour. 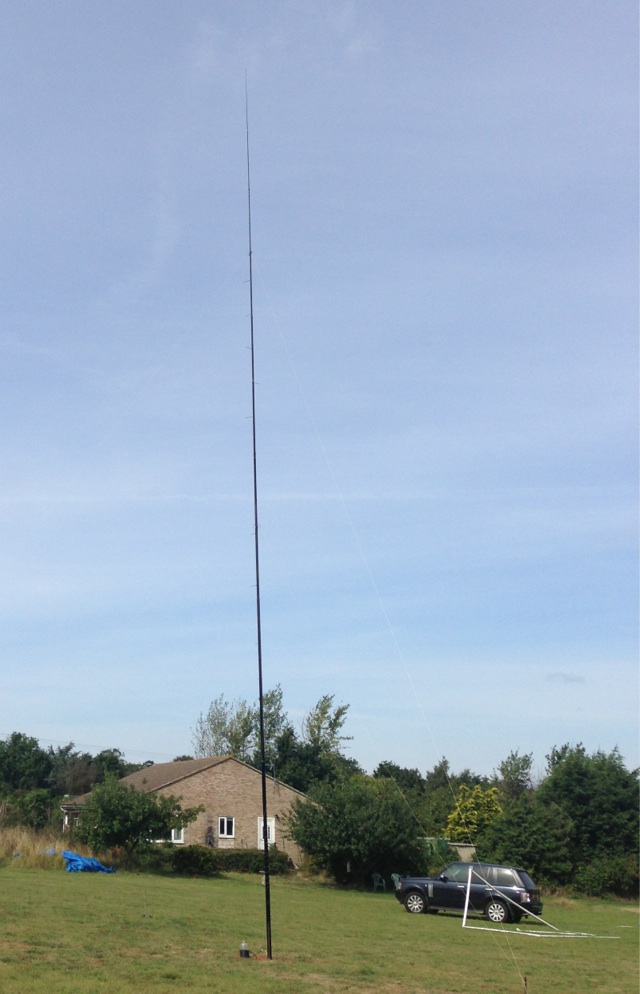 The guyed 80m vertical. You can see the sweet jar choke at the base 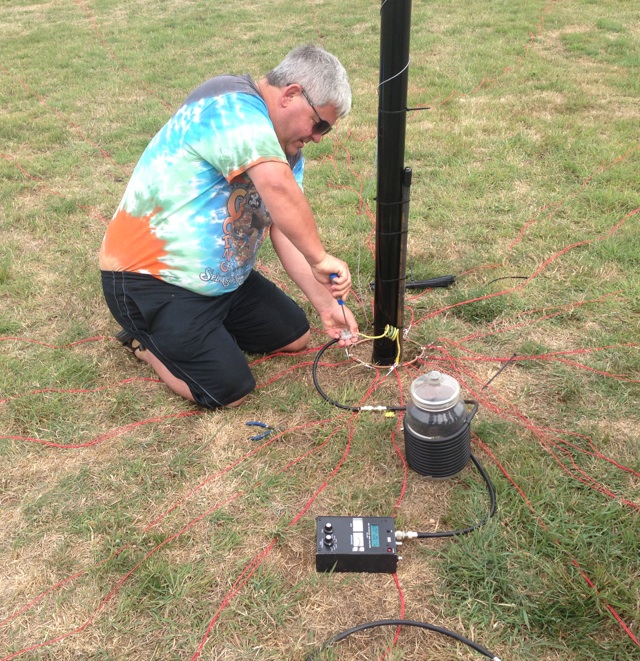 I said in a previous post that we’ll be going back to Herm in 2013 and I am very happy to announce that this is now confirmed.

This year we are going for one extra day, heading to Herm on Friday 4th October and returning on Wednesday 9th October.  Full details can be seen on The Plan page.  I’m pleased to say that we have an additional team member, Kevin (M0GWE) and this addition is reflected on The Team page.

Kenwood UK are once again loaning us a TS-590 and we’re very grateful for this.  We will be running three stations, two of them equipped with TS-590s and the third will be using a TS-2000 with upgraded filters.  We’ll still be using Win-Test in DXpedition mode for our logging.

“The cottages are booked.

The ferry is booked.

We are going to Herm!”