Of course, it’s not practical to use this mode for a conversation (although it has been done, very slowly) but it’s good for propagation testing.  There are a number of stations, known as ‘grabbers’ around the world monitoring very small sections of the HF bands, listening for these incredibly weak stations and posting screenshots of the received signals to a special mailing list for all to see.

On the 9th January, 2011 a QRSS beacon was installed at the Martello Tower using the callsign G0PKT.  This beacon is in the 30m (10MHz) amateur radio band and this band was chosen because of a few reasons.  Firstly, there are quite a lot of grabbers active on 30m.  Secondly, 30m is always open to somewhere, typically within Europe during the day and going worldwide overnight and thirdly, voice transmissions are not allowed in this band so these very weak beacons are unlikely to suffer too much interference.

As of 28th May, 2013, the beacon is a Hans Summers QRP Labs ‘Ultimate 2’ kit.  The output power is around 150mW to a half wave dipole strung out at the top of the Martello Tower.  The dipole is simply a pair of 7.1 metre legs with a balun in the centre and RG58 coax leading back to the transmitter in the shack.  The beacon transmits using FSKCW with a symbol (dit) length of six seconds to allow the callsign to fit nicely in frames for easy stacking.

On the 8th July 2013 we changed to the special 2.02k firmware which allows both WSPR and QRSS in the same ten minute frame.  G0PKT now transmits a two minute WSPR signal starting at 08, 18, 28, 38, 48 and 58 minutes past the hour followed by eight minutes of QRSS.

On the 17th September 2013 we added a second transmitter running both WSPR and QRSS on the 10m band.  The timing is exactly the same as our 30m transmitter as described above.  On 10m we’re running a little more power though, 300mW into a 5/8 vertical mounted on top of the Martello Tower.  On the 12th September 2015 at 17:00z the 10m transmitter was replaced with a Hans Summers "Ultimate 3".

Seven years later, on the 5th September 2020 we replaced both our beacons with a pair of 'Ultimate 3' transmitters.  Output power on both is set to 250mW and we've replaced the 30m dipole with a quarterwave vertical.  Frequencies and modes of operation are unchanged.

On 12th October 2020 G0PKT QSYd to a new frequency on 10m as per the new QRSS band segments introduced a couple of days earlier - You can see an up to date version of the QRSS frequencies here.

In early 2021 we decided to add Slow Hell to our transmitters and in order to get the best possible frequency stability, the G0PKT transmitters were rebuilt once again, this time using a pair of Ultimate 3S units with TCXO modules instead of the Si5351A synthesiser. This was completed and the beacons returned to air on the 20th February 2021.

At the time the beacon first went on air, propagation was terrible.  The HF bands were pretty quiet and nobody saw the signal.  Conditions improved and a couple of weeks later we started receiving reports saying that G0PKT had been spotted.

In mid June 2021 we added a QRSS Grabber which is co-sited with GB7CL, our DMR repeater.  It's a Raspberry Pi4 with an RTL-SDR-V3 dongle and the aerial is a dipole at about 15' AGL. The latest captured frame is below and the full grabber can be seen here. 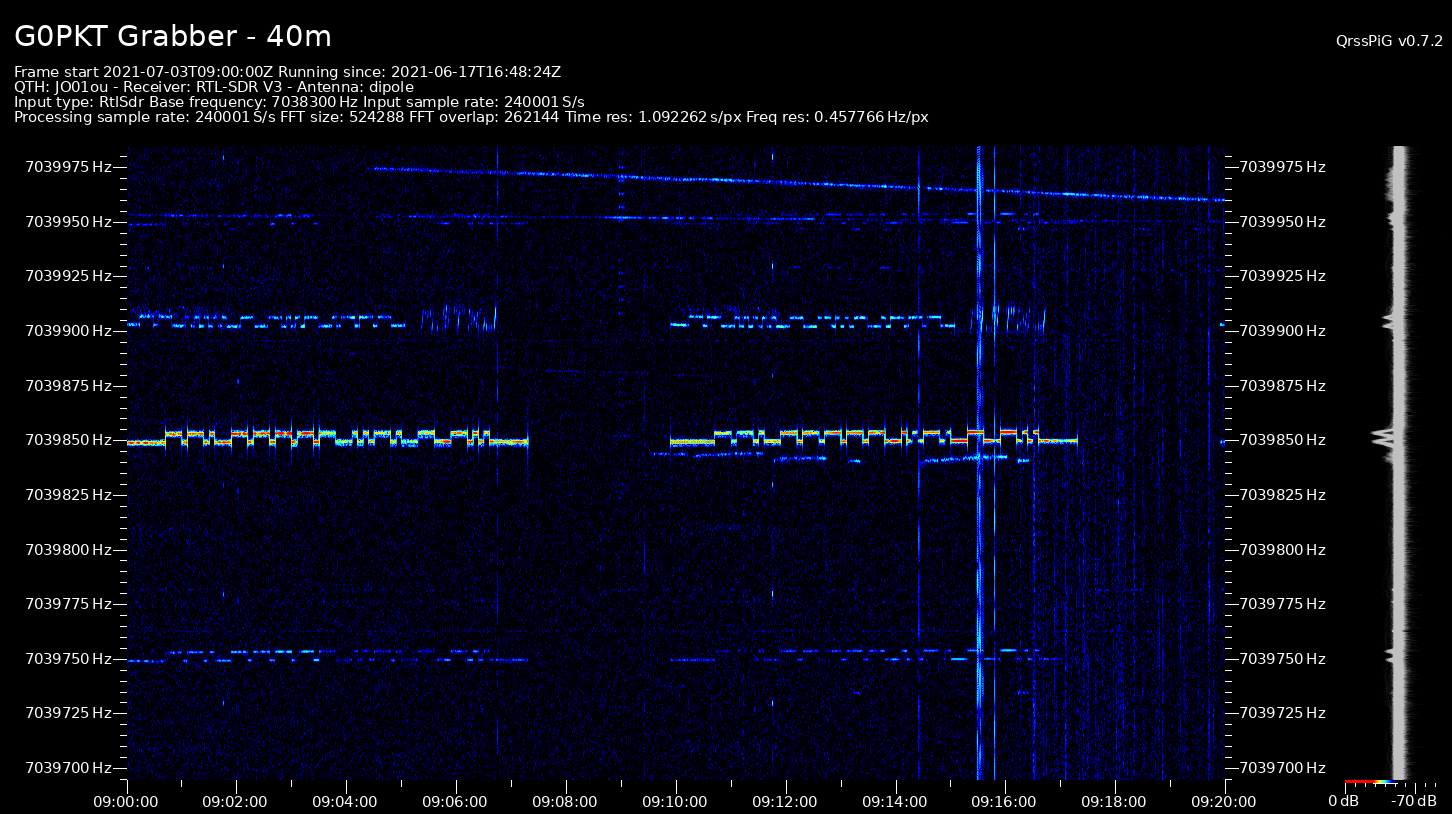