Full report on our DXpedition to Herm

Our trip started early when I picked up Richard, G7HJK at 01:30 on Thursday the 4th October 2012 for our drive to Poole to catch the ferry to Guernsey.  All the equipment had been loaded into my car and the rest of the Martello Tower Group were flying from Gatwick without even taking any hand luggage. 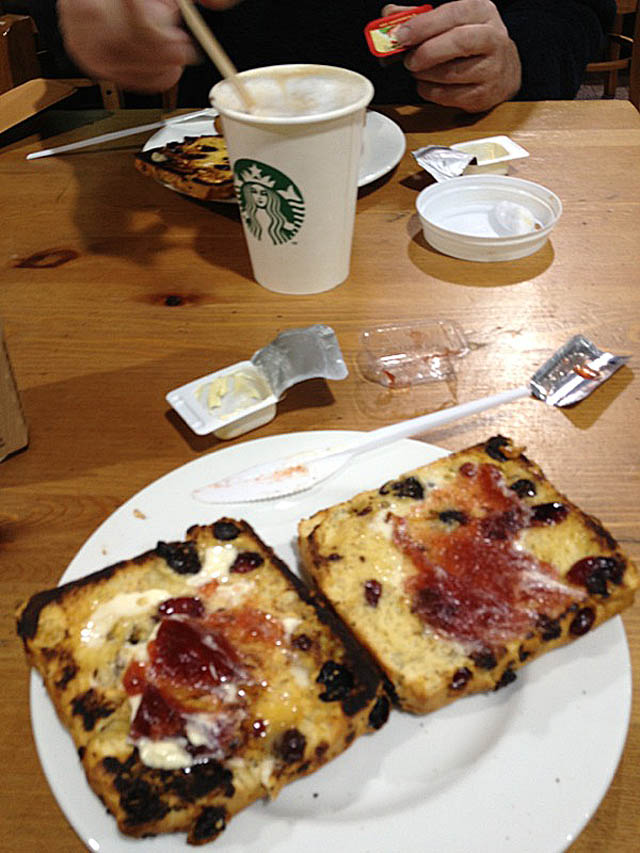 With no traffic on the roads we arrived at Poole with time to spare and were soon loaded onto the ferry.  Departure time was scheduled for 07:00 but the boat actually left early and at 06:50 we steamed out of the harbour. 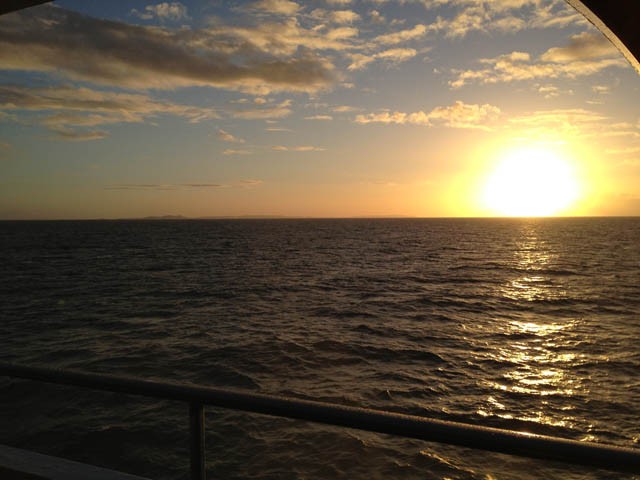 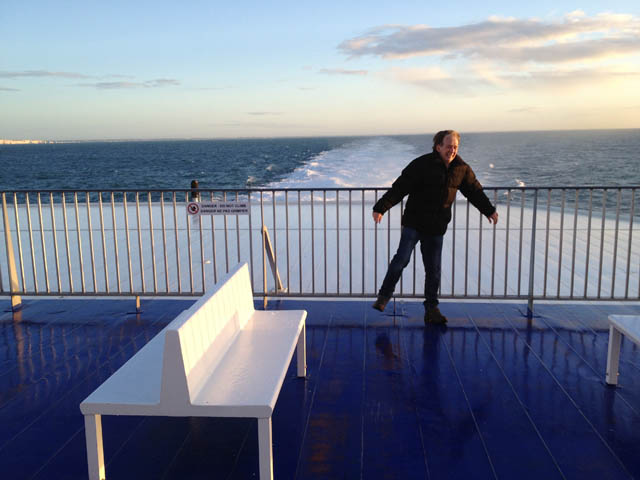 Meanwhile, the rest of the group had a late start, not having to leave Clacton until around 05:00 and so Richard and I were partway to Guernsey by the time they walked out to board the aircraft at Gatwick for the flight. 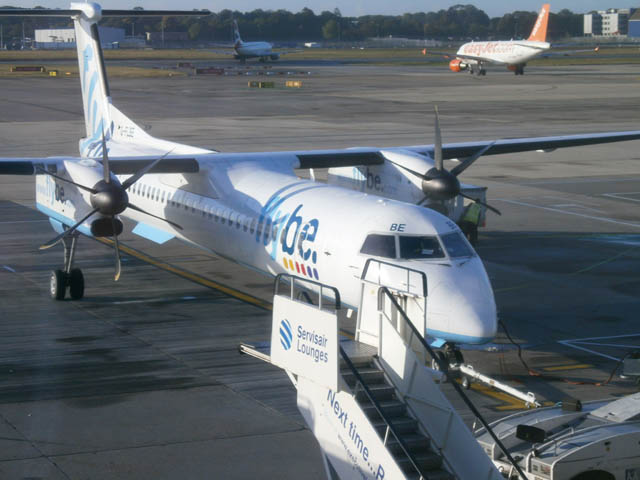 As we approached St. Peter Port in Guernsey I received a ‘phone call from Tony, G(U)0MBA.  Not only had they arrived before us but they’d managed to get a taxi from the airport and be sitting in a cafe with coffee waiting for us to arrive.  We quickly hooked up, got the car unloaded and parked (Thanks to Dick, GU4CHY for the use of his field) and were ready to board the ferry to Herm. 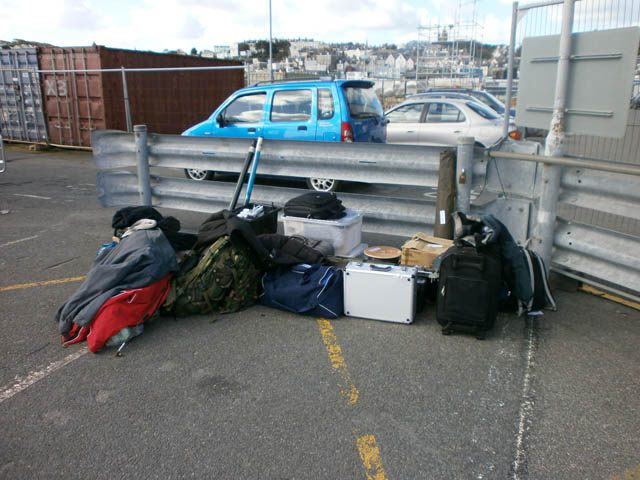 All the equipment ready to go to Herm 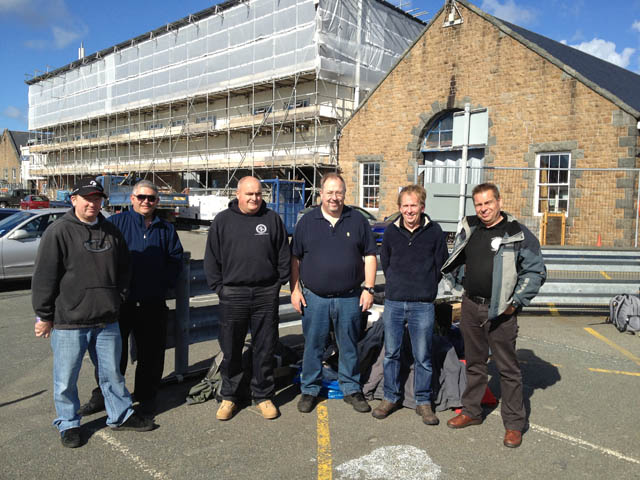 The boat from Guernsey to Herm takes around 20 minutes and it was calm and uneventful, before long we arrived in Herm and all our equipment was unloaded from the boat and reloaded into a wagon behind a quad-bike and was taken off to our cabin.  We had a short but very steep walk up to the cabin which took longer than expected.  It was a warm day and we were all pretty tired, especially Richard and I who hadn’t slept the previous night due to our early start. 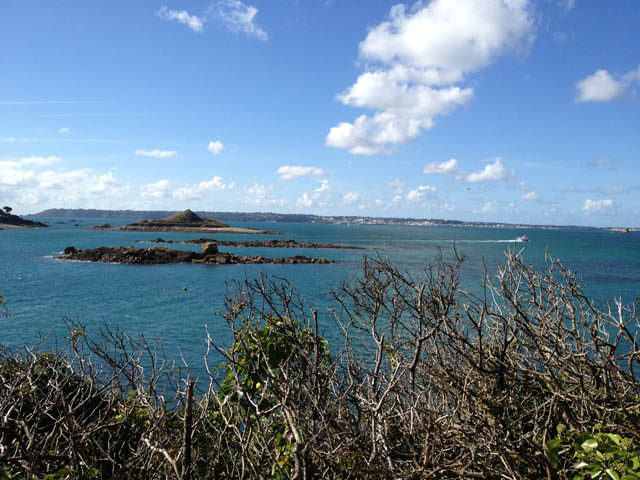 Once there we unpacked all the gear and after a quick drink we scouted around to see where we could put the aerials.  I’d been told that there was a small grassy area at the front and a field that we could use over the other side of the track.  In all honesty I was a little worried about space for aerials but those worries were unfounded because right behind the cabin was this field. 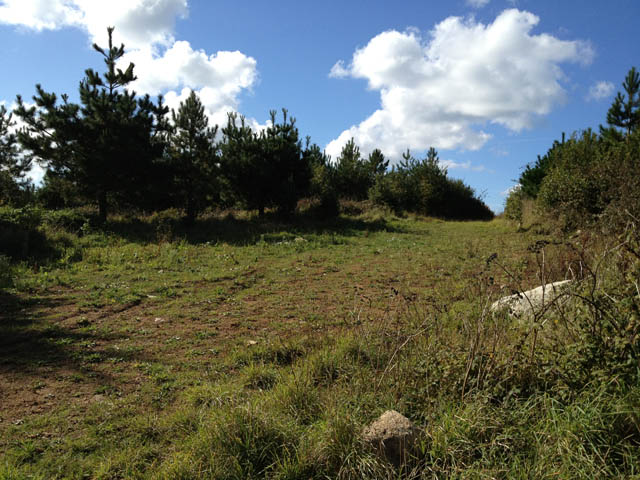 The field behind our cabin

The field slopes a bit going up to the top of the picture and that faces west.  I decided to have the 20m vertical at the top of the field so it had most clearance and put 80m at the bottom with the 40m/15m aerial in the middle.  The 10m beam would go in the area at the front of the cabin.

Work started first on the 80m 1/4 wave vertical which was mounted on an 18m Spiderpole.  These poles really are great and I can thoroughly recommend them. 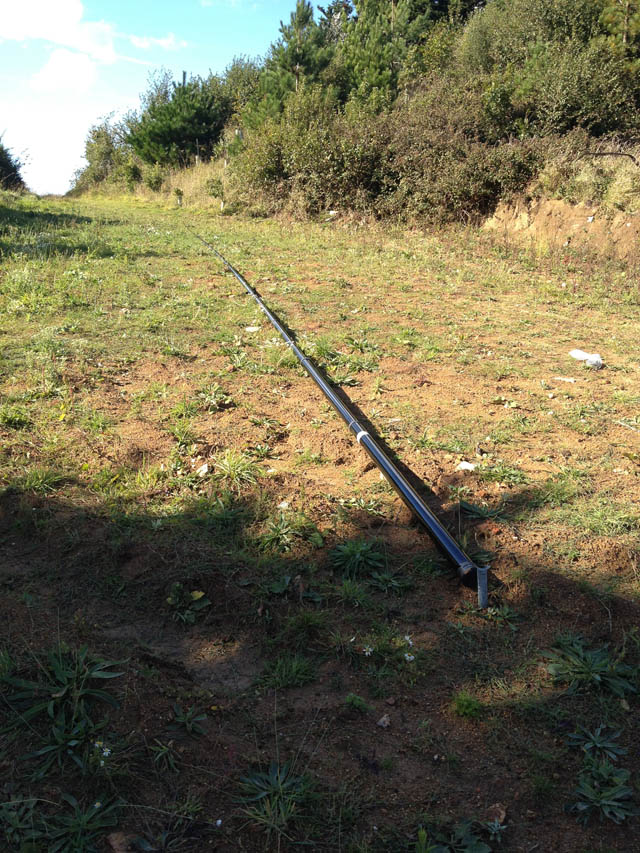 The 80m vertical laid out in the field

While we were working on preparing the 80m vertical, Chris and Yan were hard at work getting the homebrew 10m beam up.  Yan made this and we’ve tested it out a few times over the previous few months – It’s a great lightweight aerial that can be put up very quickly. 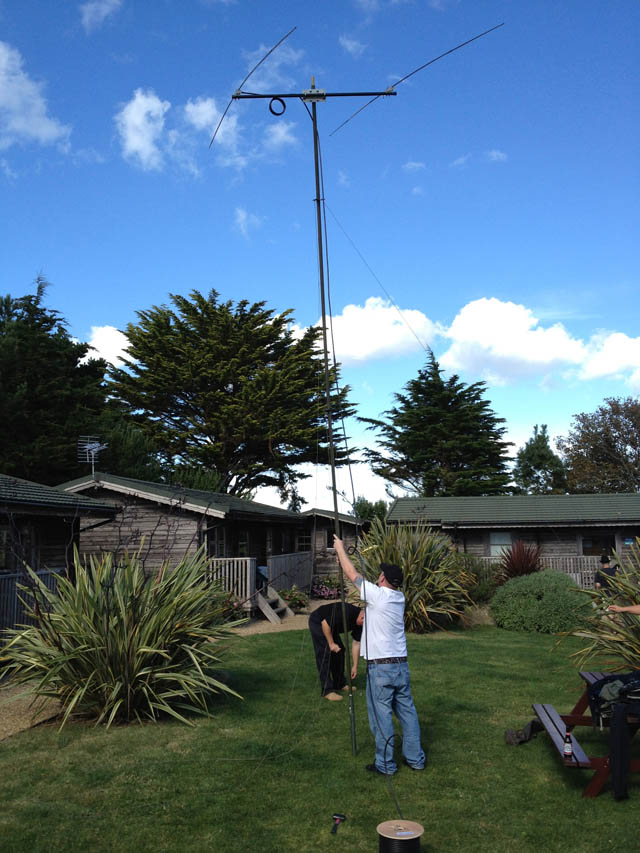 Tony and Colin built the stations and in the next picture you can see them and you can just spot Richard who spent most of the afternoon soldering PL259 connectors onto lengths of cable.  Because we didn’t know exactly where the aerials would be located we carried two 100m rolls of RG213 with us to Herm. 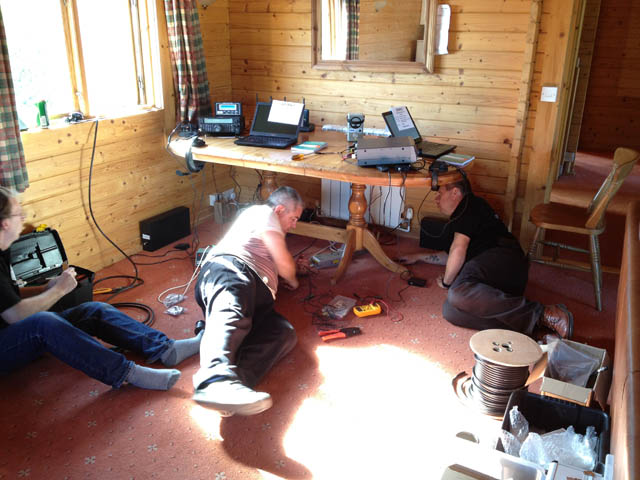 Our first QSO was at 14:30z just testing the 10m aerial and after that we concentrated on getting the rest of the aerials up – The 80m vertical took the longest to assemble, the 40m and 20m aerials were very quick and easy but an 18m long pole takes a little more work.

There were three more QSOs made on 10m between 16:03z and 16:11z and then at 16:26z I exchanged messages via the internet with Peter, 2E0SQL who gave us a quick test on 40m.  He then spotted us on the DX Cluster and the radio exploded with stations!  In the first hour I worked 107 stations on 40m and our 20m station managed another 40 or so.  I’ve never been on the working end of a pileup and I think I coped fairly well with it.  At one point in the first couple of hours, Tony was operating on 20m, he just took his headphones off and started laughing.  It turned out that there were two italian stations arguing between themselves as to who was going to work him first so he just sat and let them get on with it.

The rate quietened down as the evening went on and we finally crashed out to bed with stations still wanting to work us at about half past ten local time.  Everyone was very tired, especially those of us who had gone by boat and had been awake for about 40 hours.  It was only the adrenaline rush from that first operating stint which kept me going.  At the end of the first evening we’d got 654 QSOs in the log and even if the radios had blown up and the aerials fallen down overnight, I’d have been satisfied.  My original goal was for us to reach 2,000 QSOs but after that first evening I revised the goal up to 3,000 QSOs.

Talking of aerials falling down, we had a call from our contact on Guernsey earlier on Thursday evening telling us that very high winds were forecast overnight and lowering the 80m vertical might be a good idea.  We loosened one guy rope and laid the vertical down and did the same with the 10m aerial.  It was a good job we did as suggested, the winds kicked up around 22:00 and the rain started.  I think the 80m aerial would probably have coped but it wasn’t ours and therefore we did as we were told! 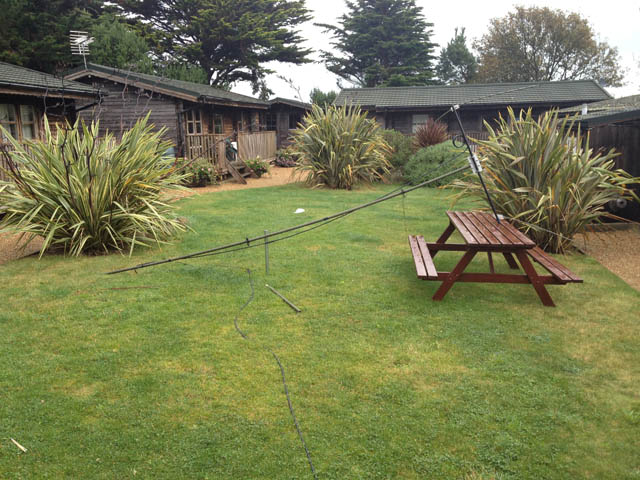 The 10m beam lowered because of the wind

You’ll notice in the first pictures that we had bright blue skies and sunshine.  That was the last we saw of the sun, it pretty much rained continuously for the rest of the time we were on Herm with just a few breaks.  We didn’t see blue skies again.

Essex was going through a mini-heatwave at the time!  We all spoke to our partners while were were on Herm only to be told how lovely the weather was back home. 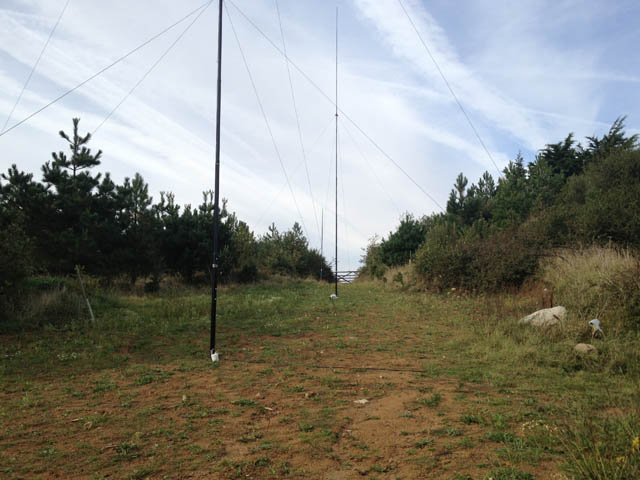 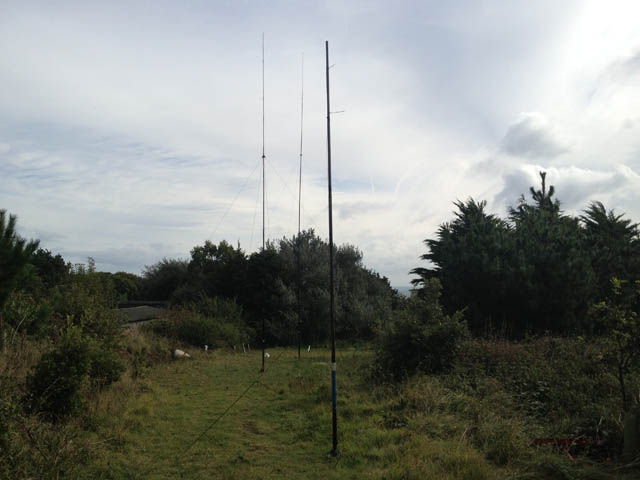 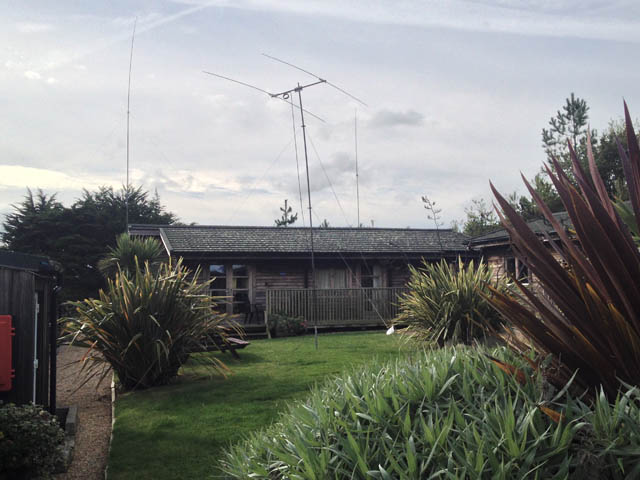 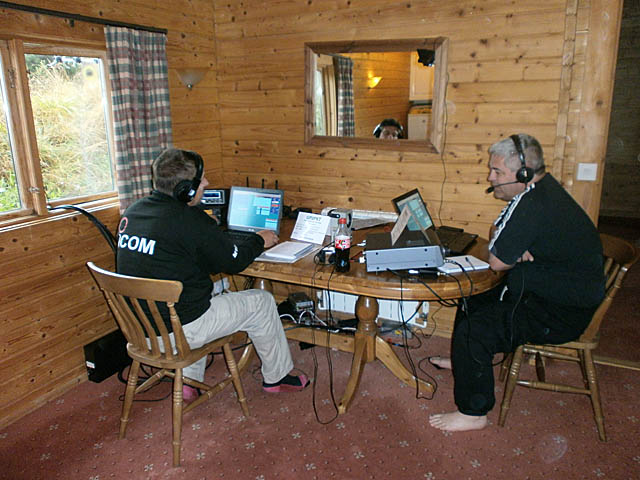 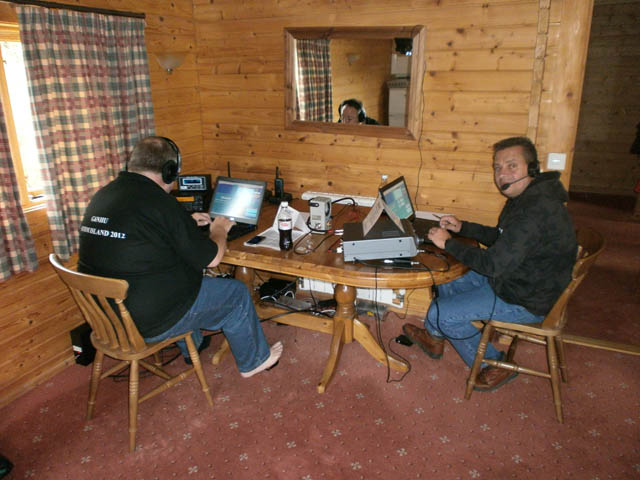 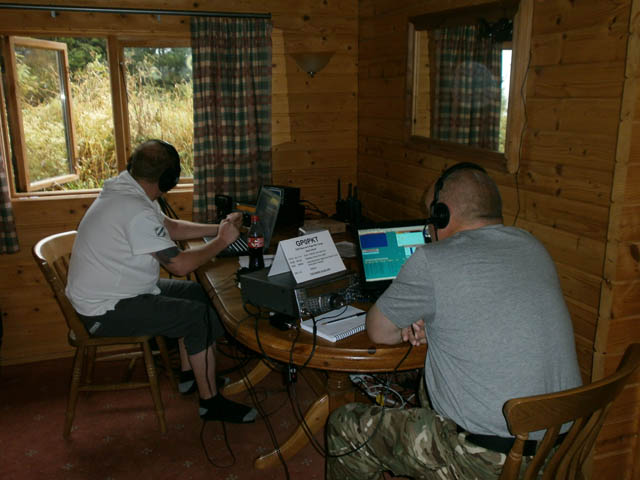 You may have noticed that Richard is absent from the above pictures – Richard was our chef and responsible for keeping us fed and watered during our stay on Herm.  He did make one QSO though working W1LIC on 20m JT65. 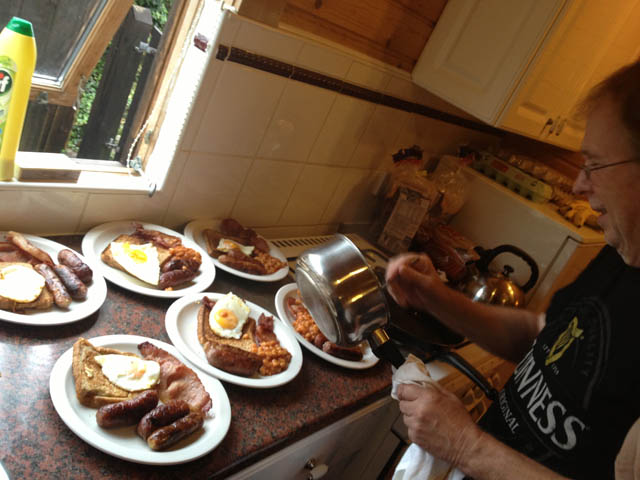 Breakfast being prepared by Richard G7HJK

We ended up with a total of 3,010 QSOs including around 150 RTTY/PSK and just two using JT65.  Sadly conditions weren’t that kind over the weekend and so we mainly worked Europeans with 91% of our total QSOs being within Europe as can be seen below.

As far as bands go, 40m was our main band of operating and was open and running for the majority of the time.  We tended to keep 40m going except when someone wanted to operate on 15m as they shared the same aerial.  10m was a disappointment and we only managed 54 contacts on there.

Our final operator stats are:

It’s interesting to see different operating styles.  I worked as though I was in a busy contest, with a quick “five nine, thanks” style only giving more details on every few QSOs but other operators were more relaxed and had a quick chat with each station.  There’s nothing wrong with either method and it’s good to have a mix.  Personally I loved it when there were a bunch of stations calling and picking them out was a lot of fun.  We only needed to operate split once and that was on our first evening.

The journey home was…  interesting!

All week, certain people had been mentioning that they’d be arriving at home in Essex at around the same time our boat was due to dock in Poole when we would have a four hour drive to follow.  In the end that situation was reversed.  As we approached Poole I telephoned the other group to see if they’d got home yet only to find out that they were still in Guernsey.  A heavy fog had descended and Guernsey airport was closed and it was expected to be closed for a couple of days.  They eventually got the late boat out to Poole which was delayed and so they finally got back to the mainland around half midnight where they were met by Tony’s XYL who had driven down from Clacton to pick them up.  They had to return via Gatwick to collect Colin’s car and ended up getting home sometime after half five the following morning.  Richard and I were home by midnight after our drive back.  We stopped at South Mimms for coffee and cake, just as we had done on the way down. 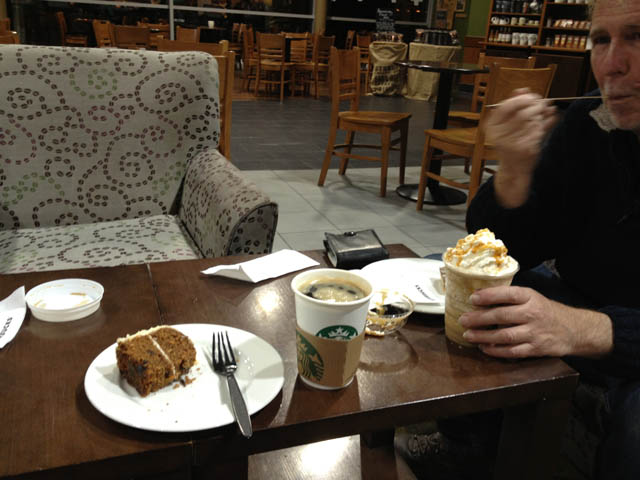 Since our return, I’ve been receiving direct QSL cards on a daily basis.  We’ve submitted envelopes to the QSL manager for Guernsey/Herm just in case anyone sends cards to GP0PKT through the bureau and not via G6NHU as requested and our log was uploaded to LoTW about ten days after our return.  Our QSL card is currently being designed and I’ll post here once the cards are ready and being send out.

If you want to peruse our full statistics for the weekend you can do so by clicking here.

We had a lot of fun on this DXpedition and we’ve already decided that we’re going back next year.  We’ll be going for one extra day and will be taking more people and more equipment.  We’ll set up more aerials, more stations and run more power.  Watch this space for details.

This entry was posted in Amateur radio, Herm DXpedition. Bookmark the permalink.

2 Responses to Full report on our DXpedition to Herm